[ARTIST ON BLAST] Big V of The Nappy Roots | www.TheMediaBlast.net 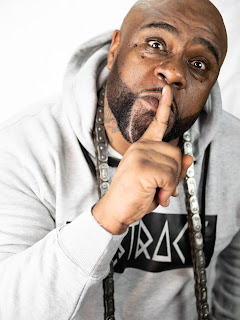 Best Rap/Sung Collaboration for "Po' Folks" which featured Anthony Hamilton and Best Long Form Music Video for "The World According to Nappy.” The group was also nominated for American Music Awards, Soul Train Awards and an MTV VMA after the release of this album.

The group’s follow up project, “Wooden Leather,” went gold and featured production by top names such as Lil Jon, Kanye West and Raphael Saadiq. The group also teamed up with DJ Greg Street for the hit single Good Day. The group has been featured on several soundtracks to include Tom Hank’s “Lady Killer”, “The South Park Movie” and “Neighbors” to name a few.  Big V has been credited as the architect of several of the group’s biggest hits including “Po Folks” and “Aww Naw”. Hip Hop magazine XXL named Vito to their top ten rap voices list.

Vito left the group in 2012 to concentrate on being a father after his kids’ mother left them at his mother’s home.  During his hiatus Vito became a spokesman for the Light of Chance program, a non-profit program dedicated to using the arts to help troubled youth.  Recently, Vito has decided that the time is right to return to music and is re-introducing himself as a talented solo artist with singles like “It’s Ok’ providing hope for all of those who are struggling during the pandemic, “Street Boy” which chronicles the problems in relationships marked by drug abuse and infidelity, and “Top of Da South” dedicated to his home state of Kentucky. He has also added actor to his lists of accomplishments landing a role in the movie “The Breakup Masters” and a lead role in the film “45 Seconds”.  In addition, Vito was featured in the made for BET movie “The Business of Christmas Part 2”, as well as the character Uncle Charles in the Geechee One Film “Black and Blue Tears”.

Big V is also releasing a solo project as a joint venture with fellow Kentuckians, Kyng of Da Beatz Productionz.  The project will feature R&B crooners Urban Mystic and Dave Tolliver from the group Men at Large.  The project will also have contributions from Country rap veterans like Dusty Leigh, Colt Fords  and Slum American artist Big Henri.

The Hit Single "All One Me" Big V featuring Urban Mystic

Stream the Music Video to "All On Me" on E Legendz

Big V. of The Nappy Roots salutes The Media Blast!