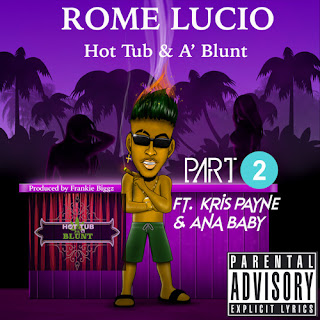 “Hot Tub & A’ Blunt – part 2” is a LIVE update from Rome Lucio´s previous “Hot Tub & A’ Blunt – part 1” track. Part 1 was all about the Blunt but part 2 is all about the Hot Tub. Get ready for this catchy, super sexy and secular track that takes you into the world of the hottest Hot tub stories. Part 2 features super artists Anna Baby and Kris Payne.

A blunt is dope, but a Hot Tub…damn stories that happen in the Hot Tub stay in the Hot Tub. Ana Baby experiences the hotness of the Hot Tub while Kris Payne features the tunes. Get ready for sexy bubbles and silky sheets after the Hot Tub…with Rome Lucio.

Rome Lucio is a Mexican-American rapper, singer songwriter, and musician. He is known for writing and performing in a variety of genres. In 2007 Rome Lucio became the youngest artist to sign to Florida Record Label Rama Music LLC under his father´s wings, well-known Grammy Award winning producer, Frankie

Biggz. On the 9th of September 2015, his birthday, Rome dropped his first album, “Under the Moonlight”. From this moment on he released many hit songs with the song “My City” hitting 1.3 million views on WorldStar.

Rome performed on stage with some of the biggest world artists such as Kurtis Blow, Faith Evans and his best friend today, Dalia Chih.

With her talent, beauty and charisma, Ana Baby is undisputedly one of the most promising and highly sought-after artists in 2018. Ana Baby has performed in front of over 10.000 roaring fans, opening for prominent artists such as Lil Durk, Vado and French Montana. She has worked with major artists such as Emanny, Fred The Godson and Chris Brown. Her “TALKIN BOUT” music video has over 6 million views, while “TURNTUP FT. JADAKISS” has over 3 million views on Worldstarhiphop.com. Ana Baby is sure to continue climbing the Hip-Hop charts with no signs of putting her foot on the brakes!

Kris Payne is not your average rapper. His flow and lyrics will take you back in time, while his smooth, raw vocal delivery is poetic and wistfully visual. Kris often draws comparisons to the likes of the Notorious BIG, LL Cool J and Dr. Dre.

Kris worked his way into regular rotation on BET’s 106 & Park and then found himself in a cipher with Run DMC. Payne drew the attention of Public Enemy’s Chuck D and The Bomb Squad super producer Keith Shocklee, both local Roosevelt, Long Island natives. Kris invested the past five years into building trust, which led to his mentorship from Hip Hop legends and eventually projects with Common and Rakim. Most importantly, Kris made the transition from playground battle rapper to recording artist and is now poised to set the stage on fire.