FOR IMMEDIATE RELEASE: RAPPER DREADROCK BLOWS AWAY THE COMPETITION AND HATERS WITH NEW VIDEO

June 14, 2019
FOR IMMEDIATE RELEASE:  RAPPER DREADROCK BLOWS AWAY THE COMPETITION AND HATERS WITH NEW VIDEO 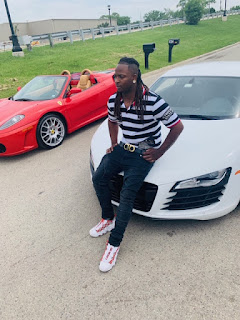 VIDEO:  https://youtu.be/edgB27uGB3c
Rising Chicago based rapper Dreadrock
promises to blow you like a flute if he shoots
on the new video to the single fittingly titled "Flute".
The track is laced with a hypnotic yet
soothing flute melody accompanied by hard hitting
drums provided by super producer, the one
and only Winiss.  Dreadrock matches the
stellar production with boisterous and energetic
vocals that prove to the listener that he's not
the one to play with.  On the hook Dreadrock
boldly chants "I'll blow you like a flute if I shoot"
as he demonstrates how he'll get the job done.
The visually appealing video shows drawn
illustrations being fired from the weapon as
Dreadrock lyrically makes his declaration to
blow you away if you stand in his way.
The full single is available on his latest project
Born Broke, available everywhere music is being
sold digitally.  Visit the links below to get
more updates and news on the Chicago
based recording artist Dreadrock.