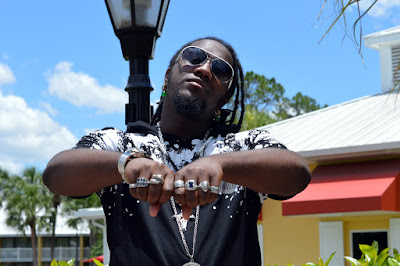 SwagSwitcha Double J.B The Platinum King, when you refer to one you refer to all. You may remember him originally as the Commander in Chief of the Mild Fleet. Since then he has retired that position and became the bridge between mainstream rap and Nerdcore. Unique from his look to his music, it will open the eyes of all who listen. His style and swagger is as good as his flow and lyrics, and he shines as bright as the0 jewelry he rocks. Nerdcore is his home, but his sound knows no boundaries just like his style has no limits. No matter what music he does, Nerdcore or not I will always stay true to his self and that is a GFL “Gamer for Life”. Hip hop is about expressing oneself and talking about what I know and your experiences. I grew up around drugs, sex and money and street life but lucky for him, he chose anime, video games, super heroes and the nerd life.
Check out the new single I’M ILL from SwagSwitcha's  upcoming EP Kings Banner available late May. Follow SwagSwitcha and listen to the track on Spotify. You can also find the artist on Itunes. Shout out to the beat maker Behemoth Beats check him out on soundcloud. @behemoth_beats
https://open.spotify.com/artist/1arTtIP3FzPLCCzwsYnvf5
http://itunes.apple.com/album/id1456993792?ls=1&app=itunes
http://itunes.apple.com/album/id/1456993792
https://soundcloud.com/swagswitcha/im-ill
https://swagswitcha.bandcamp.com/track/im-ill
________________________________________________________________