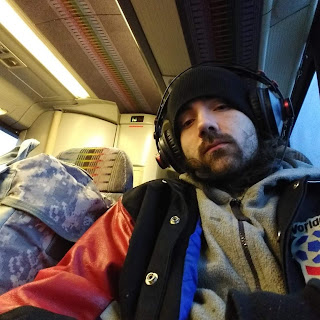 The Media Blast sits down and speaks with rising west coast rapper THOR about his music, past, present, future and more!  Read all about what he has to say in this quick but in-depth one on one interview.

The Media Blast:  Thor is your actual middle name too correct?  How has it been living with a name like that?
Thor:  Thor isn't my middle name but it was supposed to be my first name and I've always been called Thor. There has been some hate especially as a child but I've always felt it was perfect for me.

The Media Blast:  Are you a fan of the comic book character as well?
Thor:  I am!  Although I veiw Thor as more of a Norse God than a super hero.

The Media Blast:  How long have you been rapping and what inspired you to rap?


Thor:  I've been rapping for eight years, my friend discovered my poetry and pushed me to never give up.

The Media Blast:  Who is in your top five when it comes to emcees, and why?


Thor:  Eminem, Hopsin, NF, Atmosphere, and Kendrick Llamar, mainly because they all speak the truth. Although I enjoy the older stuff from Eminem and Kendrick more.

The Media Blast:  How would you describe yourself as an artist?


Thor:  I have a vision of transforming this world through my sound and words. I'll do whatever it takes to make that happen.

The Media Blast:  What type of beats bring out the best in what you do?


Thor:  I can honestly write to any beat but I LOVE working with piano.

The Media Blast:  Speaking of beats, who are some of the producers you work with? Thor:  Legion beats, Kash Keys, The1isBeats, and I'm currently working with someone new but that's a surprise.


The Media Blast:  Who are some producers that you would like to work with in the future?


Thor:  I'd love to work with Daft Punk and Diplo.

The Media Blast:  You were recently introduced to prestigious hip hop and nerdcore producer Philonious Phunk, the man behind Florida based supergroup S.P.F. (Symphonic Pheenix Force), what was your experience chopping it up with him and can you see yourself working with him in the foreseeable future?
Thor:  I like his use of the old school video games. A lot of these songs seem to have a motif of that in the lyrics as well. Definitely unique and very catchy. I personally would love to use beats with some of my favorite video games in them I just would worry about copyright issues.

The Media Blast:  What would you say 3 milestones in your rap career has been so far?
Thor:  Finding my rhythm, finding my flow, and finding my audience.

The Media Blast:  What was one of the worst experiences you've faced in the music industry and how did you bounce back or learn from it?
Thor:  People see talent and they try to smash it because they fear of others being bigger than them, simply embracing that has helped to me overcome.


Thor:  To find stability and keep growing as an artist. To continue reaching the world and doing more than had ever been done for me.

The Media Blast:  You are also a crusader or people battling depression as well, what inspired you to take up the cause?


Thor:  My experiences has always made me a leader, I just want to promote awareness and show others that no matter what you've been through, you can do anything.

The Media Blast:  Where are you currently located and how is the music scene where you are at?


Thor:  I'm currently in Las Vegas, and the music scene here is pretty crazy, I still need to go around and see what I can accomplish but I've focused on survival first and foremost.


The Media Blast:  Is there anything you would like to plug?  Any shout outs?


Thor:  I want to shout out to everyone who continues to support me despite all I'm going through. It's because of them I'll never stop.


Listen to THOR's music at the direct links below....