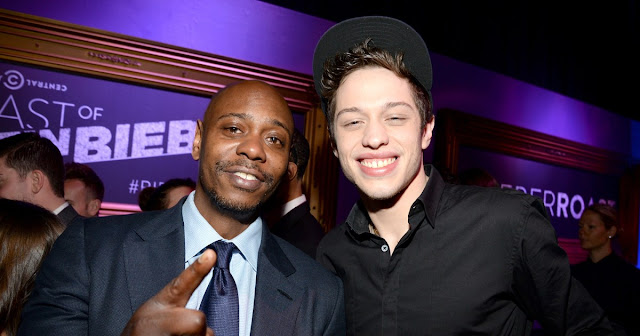 Before the holidays and following his very intense, emotional on the brink of suicidal social media post, Saturday Night Live star Pete Davidson spent some quality time with friend and comedian Dave Chapelle, Us Weekly reports.
"Pete spent a few days before Christmas hanging out with Dave Chappelle in Ohio," the insider said. "They have been friends through the comedy world."
"Pete wanted to get away for a few days to feel better, so Dave invited him there. Dave has a house somewhere in the woods."
Chappelle was later spotted at Kim Kardashian and Kanye West's Christmas Eve party while Davidson spent the holidays in New Jersey.
The escape to Chappelle's house came after Davidson ignited alarm bells with a startling message on Instagram on Dec. 15.
"I really don't want to be on this earth anymore. i'm doing my best to say here for you but i actually don't know how much longer i can last. all i've ever tried to do was help people. just remember i told you so," he wrote.

Celebrities came together and rallied around SNL star after his post, including ex girlfriend Ariana Grande. The singer reportedly showed up to the Saturday Night Live studio to check on him, but Davidson refused to see her.
Just before Davidson's alarming post, the comedian praised West for calling out Grande, who made a joke about West's online feud with Drake.


"Bravo Kanye West for standing up for yourself and speaking out against mental health. I can't explain to you enough how difficult and scary it is to be hoenst about stuff like this. We need people like Kanye. No one should ever point fingers at you for your bravery in speaking about mental health. I'm seriously disgusted," Davidson wrote.
For all appearances, Davidson appears to be doing better now and was most recently spotted at Machine Gun Kelly's concert in Cleveland on Saturday, Dec. 22.
Keep checking back with The Media Blast for more Pete Davidson and SNL news!
____________________________________