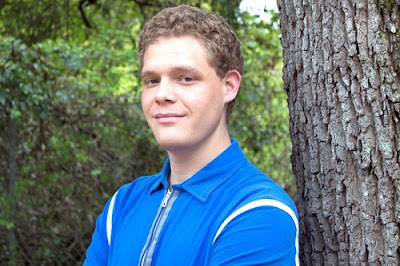 Tonight, Jay of The Media Blast sits down with actor James Tavelle for a one on one, brief but very informative interview about acting, his experience in showbusiness and his role in the new Amazon Prime film "The Ugly Friend" (written and produced by Felicia Rivers of Geechee One Films) among many other things.


Get familiar with the bright, rising actor by visiting his official IMDB page below....

The Media Blast:  Hello James Tavelle, how are you?  Are you ready for the interview?
James Tavelle: I'm great! Thanks for asking. And, yes, I'm ready.


The Media Blast:   Could you tell the readers a little about your role in the movie "The Ugly Friend"?
James Tavelle:  Well, I play the character Ryan. He's Alvin's best pal and regular college student trying to survive the midterms (as he so graciously points out to Alvin). Unfortunately for him, he gets dragged into Alvin's relationship problems and he isn't too happy about. Neither would I for that matter.

The Media Blast: How did you book "The Ugly Friend"?
James Tavelle:  I attended an open-audition that Felicia [Rivers] held earlier in the year for one of her other projects.  I got the part and she liked my audition enough to ask if I'd like to have a role in "The Ugly Friend" as well.  Needless to say, I said, "Heck yeah!" and went for it.

The Media Blast:   What would you like to tell the readers about the movie?
James Tavelle:  In two words: it's funny.  I won't give the story away, but all I'll say is guys, treat your exes kindly.  They might come back to bite ya.  Also, please don't drag your best friend into your relationship problems, please? They have lives too.


The Media Blast:  How long have you been acting and what inspired you to get into acting?
James Tavelle:  Well, I could say "I've been acting all my life," but in terms of filming, since late 2014.  I joined in with a few friends who were film students at the time and I haven't stopped since. I've always loved stories; I've always loved telling them, and acting is just one of the many ways to tell them and I love it.

The Media Blast:  Who are some of your favorite actors and why?
James Tavelle:  I don't have favorite actors, because it all depends on how they portray the role however I do admire a good few.  Heck, everyone knows the celebrities: Matthew Damon, Tom Cruise, Morgan Freeman, Liam Neeson, etc. Again, there's a great many I admire, but I don't play favorites.

The Media Blast:   What are some of your favorite movies and why?
James Tavelle:  "Sahara" (2004) takes my top spot.  It was never rated as a 5 star film, but I love that one because A.) Great story B.) a balance of both seriousness, humor, and action C.)  great acting and character portrayal, and D.) you can tell the cast and crew had a fun time making the film, which is a very important thing when shooting a project.  If no one is enjoying themselves, the film's gonna suck.  Plain and simple.

The Media Blast:  What are some of the roles you've gotten so far?  What is on your resume?
James Tavelle:  Asides from Ryan? Well, I as I pointed out earlier, I had a role in one of Felicia's other works, "Untimely Reunion", so that's one, but I've also been in a lot of other things--heck, I lost count of how many I did this past year alone.  To name a few though, I played a comedic friend and ex-fratboy named Andy, in one film called "Law of Attraction" (still in pre-production, but will be out in 2019); a Nazi Soldier named, Klaus, in a historical-action piece called, "Operation Resist" which is also set to come out next year; and some other characters in other films such as "Angel in a Foxhole" (2019), "Faith's Song" (2017), "Junior" (2019), etc.


The Media Blast:   What are 3 big milestones you've had in your career as an actor so far?
James Tavelle:  Milestone 1: making it to the big-screen. It is such a thrill when you actually do a film and see yourself in a theater. Of course, it's also nerve-wrecking because you're terrified of what others will think of you and--more importantly--what you'll think of you. You're your own worst critic after all.

Milestone 2: Meeting professionals in the biz, that's a milestone in itself, because I'm going to be honest about this life: it's easy to try out, but hard to get into, but if you're determined enough, you'll eventually get in; and once you're in, you're in.

Milestone 3: I got to meet Danny McBride, Brenden Gleeson, Walton Goggins. Never in a million years did I think I'd get to meet and have a conversation with these talented gentlemen.


The Media Blast:  What is one of the worst experiences you've faced as an actor so far and how did you bounce back from it?
James Tavelle:  Finding a real, "swear-I'm-not-gonna-scam-ya!" agent. My gosh, you have no idea how hard it is to find a legit agent who's not out to con you.  While I know it's possible to find acting gigs without an agent, for people who are just starting, it's difficult to find work without them.  I struggled with this all through 2017 and am still struggling now.  Fortunately, if you know and meet the right people, you will find work, even without representation. Right now, I'm looking to find a good agent in Atlanta. Fingers crossed.

The Media Blast:  Who would you like to work with in the future?
James Tavelle:  Steven Spielberg and Sam Worthington. Steven is a genius when it comes to film and Sam, I've always liked him as an actor since he never set out to be famous to begin with. Humble actors are awesome.

The Media Blast:   Speaking of the future, what are some of the projects you have coming up or what's next for you as an actor?
James Tavelle:
At the moment, I'm aiming to take on a few more projects in Atlanta and have another one with Felicia. I can't give out certain details about it right now. You know, top secret stuff. *Wink* But, what I can tell you is that it's a horror, so have an extra pair of pants on standby.