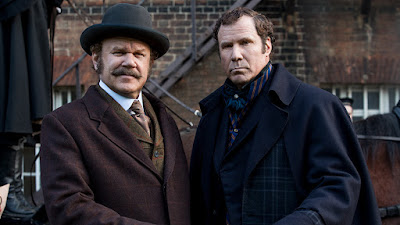 New comedy Holmes & Watson is said to be so bad that it’s prompting walkouts from cinemagoers across the nation.
The Sony film – which unites Step Brothers stars Will Ferrell and John C Reilly – was released on Christmas Day having not been screened to critics before it's release date.
Following its release, reviews began to surface on the Internet, and the negativity of which lead to the film receiving a zero percent score on Rotten Tomatoes after only 24 hours.  It now sits at a 4 percent at press time.
It seems the public are agreeing with the critics. Numerous messages posted to social media reveal people have been forced to leave the cinema, with some even asking for their money back.
“Holmes and Watson was the worst f***ing movie of all time,” one Twitter user wrote, adding: “First movie I’ve ever walked out on.”
Another added: “Holmes and Watson possibly the worse film I’ve seen. Walked out the cinema.”
One Twitter user even branded the Etan Cohen film “the worst piece of trash movie I have ever seen in my entire life” with another urging members of the public to “run” away from the film.

Holmes and Watson is a spoof of Arthur Conan Doyle’s Sherlock Holmes stories – which also co-stars Kelly Macdonald, Hugh Laurie, Pam Ferris and Ralph Fiennes, who plays Moriarty.
What are your thoughts?  Post your comments below or e-mail us at Info@TheMediaBlast.net
Info@TheMediaBlast.net