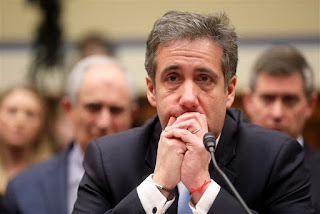 Two of President Donald Trump's closest allies on the House Oversight Committee referred Trump's former personal lawyer, Michael Cohen, to the Justice Department Thursday for possible criminal prosecution, claiming to have evidence that Cohen "committed perjury and knowingly made false statements" to lawmakers during his day-long testimony Wednesday Feb. 27th.
The criminal referral -- sent by Ohio Rep. Jim Jordan, the top Republican on the Oversight Committee, and North Carolina Republican Rep. Mark Meadows -- outlined several areas of testimony they urged the Justice Department to investigate, including Cohen's claims Wednesday that he did not seek a job in the Trump White House, his denial of committing bank fraud, as well as his assertion that he did not have any reportable contracts with foreign entities.
"I was extremely proud to be the personal attorney for the President of the United States of America," Cohen explained to lawmakers. "I did not want to go to the White House."
Yet Republicans have pointed to court filings from prosecutors in the Southern District of New York that stated Cohen "privately told friends and colleagues, including in seized text messages, that he expected to be given a prominent role and title in the new administration" -- an assertion Cohen said Wednesday (Feb. 27th) was "inaccurate."
"Mr. Cohen's testimony is material to the Committee's assessment of Mr. Cohen's motive to monetize his former association with President Trump," Jordan and Meadows wrote to the Justice Department on Thursday. "It is essential that the Department of Justice investigate these remarkable contradictions between Mr. Cohen, the SDNY prosecutors, and the public accounts of witnesses with firsthand information."
A spokesperson for the Justice Department said it is reviewing the referral.
Lanny Davis, Cohen's attorney, called it "a sad misuse of the criminal justice system with the aura of pure partisanship."
Cohen pleaded guilty to making false statements to a financial institution, however, not bank fraud, and prosecutors have not alleged that any bank lost money.
The GOP lawmakers additionally accused Cohen of lying about his contacts with foreign entities, a point highlighted by Meadows at Wednesday's hearing. Cohen said he would review the form and amend it if necessary.
- Editors Note:  Pieces of the article come from the original source on the CNN News Website.